“How can you say such things?” ...well, easy actually. And the ease of saying them is facilitated by the fact that they're true.

To Learn what this cliche' exercise in pedegogy is, see the post after it. 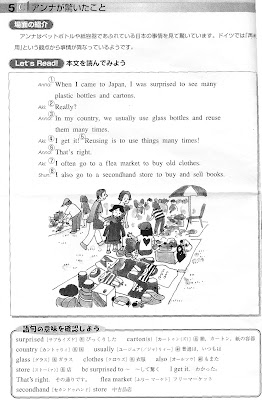 Below is an example of the typical "lesson" in learning English in Japan. Like America and a host of other countries, the actual subject at hand has now taken a secondary position to proselytizing politically correct views on the environment, race, war, internationalism, etc.

I certainly have no objection to the idea of recycling or even occasionally noting the benefits of doing so before students but...This stuff is just plain stupid. This text comes from an English language class. Where many of the students can barely say, "Excuse me, where's the bathroom" they devote their energies to leaning the "three R's" (which, ironically used to mean basic classroom curriculum).

Later in the book, a lesson began with an overview of the life of Stevie Wonder. I thought, "great!, finally something of interest without a left-wing aftertaste." I was wrong. After the introduction it went off on a tirade about Apartheid and AIDS. The issues were relevant to Stevie Wonder's life but to see them creep into the text I couldn't help but note it was just a continuation of each unit's purpose as cheap political theater (instead of instruction).

This nonsense occurs regularly in the U.S. of course and I saw it first hand -- classes full of kids who literally know nothing but "know" that the Earth is doomed and it's "our" fault.

So...learn to recycle, save the Earth, and support the latest Jacobin fad but, by all means, don't simply learn a school subject for use in later life -- that would be "selfish" of course. 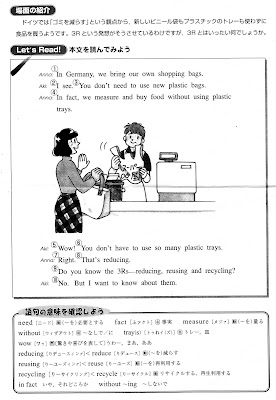 An Accurate Depiction of Leftworld's Way of Disscussing the Issues